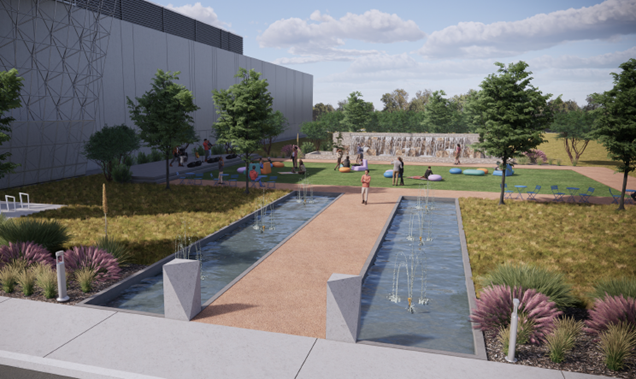 On track to open in spring 2022, Port San Antonio‘s forthcoming innovation center is already attracting promising advanced technologies to the Alamo City. The Port will be the first to acquire an atmospheric water generation (AWG) system from Genesis Systems, a developer of industrial technology that sustainably generates water.

AWG technology produces potable water from the surrounding air by extracting water vapor from ambient air via condensation, rendering the water drinkable in the process. Each Genesis unit is about the size of a shipping container and can be moved easily by rail, truck, or cargo aircraft, converting moisture in the air into more than a thousand gallons of potable water daily.

Genesis Systems will install a unit to supply water for the outdoor area at the Port’s Tech Port Center and Arena, which will act as a hub for STEM (science, technology, engineering, and math) activation for students, educators, researchers, and leading industries alike. Genesis’ technology will help demonstrate how emerging capabilities can address global water insecurity, an issue that affects almost two-thirds of the world’s population, according to the United Nations.

This specialized water generation system can increase water availability even in arid climates, during shortages, water supply contamination, or other issues that can interrupt drinking water services. Its portability means the AWG technology can be used in field hospitals, military bases, aboard ships, and support populations hit by natural disasters.

The Florida-headquartered company plans continually refine and improve its “WaterCube” self-contained unit by adding capabilities such as powering it with solar and wind energy and enabling the carbon capture of its emissions.

“As innovators, placing one of our first units at the upcoming Tech Port Center + Arena at Port San Antonio gives us a tremendous strategic advantage as we seek to continually evolve our technology and connect with users right here in our community and across the world,” Genesis Systems chief executive officer (CEO) Shannon Stuckenberg stated.

Genesis Systems chief operations officer David Stuckenberg first came up with the idea when he was deployed in 2016 with the U.S. Air Force in water-starved Afghanistan. David Stuckenberg witnessed firsthand the tremendous impact of water scarcity as massive convoys of trucks transported water to cities and towns across the desert to people who were only a day or two away from running out of water. This experience inspired David to take action with his invention of the WaterCube, which led to launching Genesis Systems in 2017.

“We will pursue continuous improvement of our working production model at the Port because the more input we get, the better we get at fulfilling our company mission of solving global water scarcity,” he said.

As an extension of the industry showroom planned for part of the innovation center’s footprint, the AWG unit’s location at the Port will allow prospective users to see the advanced technology in use.

“Governments at all levels, relief organizations, non-governmental organizations, and private enterprises are just some of the entities that will greatly benefit from our innovation,” David Stuckenberg said.

The AWG unit will also help the innovation center connect to students, Port San Antonio President and CEO Jim Perschbach said. The San Antonio Museum of Science and Technology (SAMSAT), which will be housed at the Port’s innovation center, will leverage the Genesis AWG unit in its STEM educational programs. Students will earn about the new technology and develop related projects that focus on environmental resilience and sustainability.

“We’re thrilled to be the first organization to acquire this new system,” Perschbach said. “It’s a clear and compelling example of the types of interactions and connections we are growing on our innovation campus.”

“The teams at the Port and Genesis Systems are providing our community with a tremendous educational resource—a life-saving technology with applications that are limited only by our imaginations,” Monroe said. “We look forward to building some tremendous experiences and programs around it, including engineering, sustainable agriculture, and other exciting projects.”

Natural disasters, such as hurricanes and public water infrastructure failures, like pipe corrosion leading to widespread contamination issues, have increased the interest in AWG technology, which offers both emergency and long-term supply solutions.

“We’re trying to integrate these technologies into the innovation center because we want to use the Port as a model for a corporate campus,” Perschbach said. “Ultimately, we’ll need to build places that can meet the daily water needs of its people.”

The featured image is a rendering of the outdoor space at the forthcoming Tech Port Center + Arena building where the Genesis unit will generate water. Image courtesy of RVK Architects/Port San Antonio.