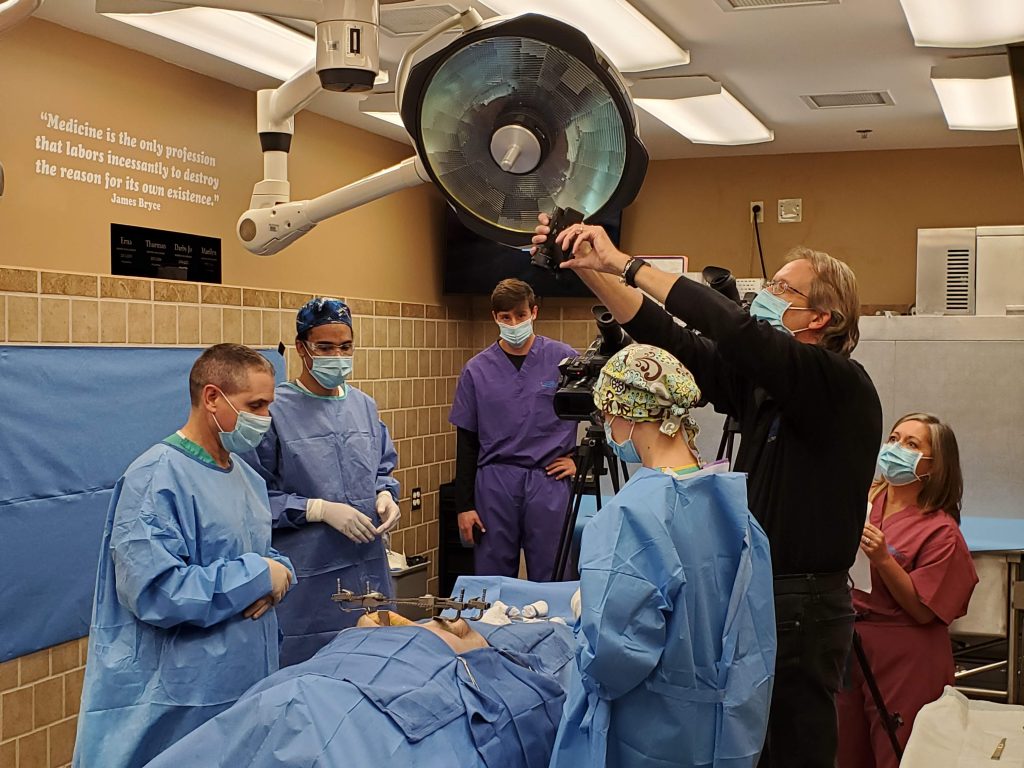 Surgical retractors are medical instruments used during a surgical procedure to keep an incision in the body open while a surgical procedure is being performed. They provide better visibility for the surgeon so the procedure can be performed easily and quickly. The invention of a hinged rib spreading retractor in 1904 prompted the development of specialized types of retractors in the early 20th century.

However, Cestero explained that the surgical retractor’s basic design hadn’t evolved much in over 100 years.

“Surgeons are currently forced to choose between speed and functionality when choosing which surgical retractors to use for surgery. You can choose a faster self-retaining retractor that is limited in how much it exposes the area to be operated on or a table-mounted retractor attached to the rails of a hospital bed. Table-mounted versions provide optimal exposure but require time-intensive assembly and setup,” Cestero said.

Cestero has deployed seven times while he was an active duty physician in the U.S. Navy, operating on trauma patients in Iraq and Afghanistan. In the military, surgeons use retractors designed for civilian use. But in the austere field conditions operating in a tent with poor lighting and a limited number of surgical assistants, Cestero realized surgeons needed a better-designed retractor.

“In a military field setting, we don’t have the standard hospital bed and other equipment we’d use in a civilian hospital setting. The table-mounted retractors we use in civilian settings take valuable time to put into place,” Cestero said. “We’re using surgical retractors that were designed 100 years ago, so the evolution of this medical device has not kept pace with modern times.”

Once he joined UT Health in 2013, Cestero focused on developing a better surgical retractor suitable for both civilian and military use.

The TITAN CSR combines the advantages of multiple retractors in one novel device. It’s designed for ease-of-use and quick assembly and doesn’t require the posts used for the typical table-mounted system. The ASR system is also compatible with all surgical blade accessories and has a self-centering adjustable frame that can adapt to different incision lengths.

“Our ASR system removes the need to attach the retractor system to the surgical table,” Cestero said. “It’ll save time and effort in the operating room taken by setting up the typical table-mounted system.”

“It’s exquisitely fast and unique and just doesn’t exist. Dr. Cestero is disrupting trauma surgery and combat medicine with this device,” Bolleter said. “Many military medicine innovations emerge from San Antonio, usually from medical practitioners like Dr. Cestero. Our city’s advantage means you’ll see ideas at the confluence of military and medical get to the bedside much quicker.”

UT Heath recognized the new retractor design’s commercial value and funded Cestero to work with an engineer to create a prototype. The founder (who is also the chief medical officer for ASR Systems) has submitted two patents under the UT System. According to Cestero, one patent was issued in 2020, and the second is still pending, plus three more have been filed.

Co-founder Mike Girouard is CEO and president of ASR Systems. He is experienced in medical device development, coming from Kinetic Concepts, where he worked on the V.A.C. or Vacuum-Assisted Closure that prevents surgical wounds from reopening. He said ASR Systems is focused on manufacturing the FDA-approved retractor and will have the product ready for testing in March.

“The biological evaluation has been done, so we’ll be moving by the second quarter into commercialization by focusing on trauma centers in central Texas,” Girouard said.

The company has four employees. Girouard said the medical device company is in the middle of convertible debt round and has, to date, raised about $1 million.

The medical device company is looking to raise another $2 to 2.5 million as they prepare to take their device to market. The global surgical retractor market accounted for $1. 41 billion in 2017 with a revenue forecast of $1.8 billion by 2025.

When every minute operating on a patient counts, a retractor that can reduce setup time will make a big difference to civilian and military surgeons alike, Cestero said. “Our mission is to advance the way surgeons operate and improve patient outcomes.”