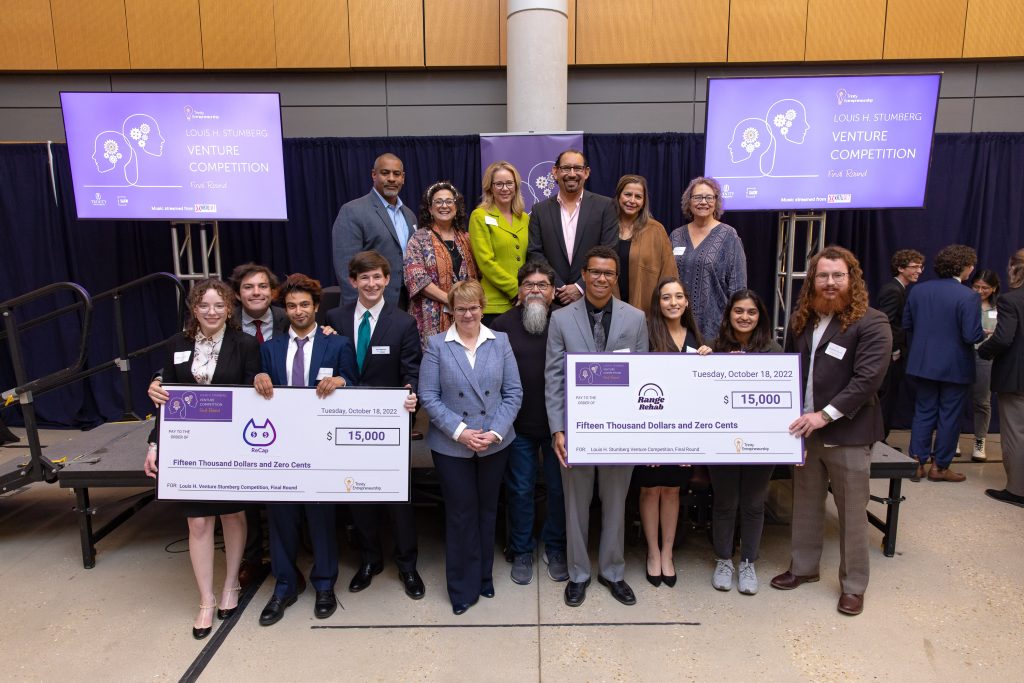 Created by juniors Lucas Riley, Paul Kim, Alfonso Kamel, and Gabriel Ogden, Skelton Musical is a wearable metronome wristband for musicians to use alone or when practicing in groups.

The Stumberg New Venture Competition is named after the late San Antonio businessman and civic leader Louis H. Stumberg, a member of Trinity’s board of trustees for many years. Stumberg was a well-known entrepreneur in San Antonio who founded Patio Foods and its line of Tex-Mex frozen dinners in the 1940s at the end of the Great Depression in the U.S.

Since its launch in 2016, this two-part university-wide competition has encouraged Trinity student entrepreneur teams to compete for equity-free funding for their startups. In the spring, a panel of judges typically chooses five to six teams out of 10 to move onto the second and final round each fall.

Each of the finalist teams receives $5,000 in seed funding, a spot in Trinity’s summer accelerator, summer housing on campus, mentorship, a credit hour, a year’s membership in the Geekdom startup co-working community, participation in Geekdom’s incubator program, and $5,000 credit for Amazon Web Services cloud computing.

The winner of the 2021 venture competition was Microlev for its advanced technology that will aid scientists engaged in aerosol research. Josefina Hajek-Herrera and Bene Snyder are working with Trinity chemistry professor Ryan Davis on their optical equipment company that provides more accurate, innovative aerosol research instruments for scientists to isolate single droplets when analyzing assays and sensors.

Over the past 10 years, Trinity’s entrepreneurship program (which includes the Stumberg Venture Competition) has been responsible for the launch of 69 student-led companies. The Stumberg Competition has helped those numbers considerably.

“Trinity has invested $407,000 in student startups over the last eight years,” said Luis Martinez, Trinity’s Center for Science and Innovation director. “These investments in 42 teams of student-launched companies over the past eight years have impacted the lives of 92 students. Like past Stumberg winners QuickSip Coffee, PatchRx, and HydroTek, these companies have raised an additional $7.5 million in external funding.”

“When you look at the total external funding raised by all startups coming out of Trinity’s Entrepreneurship program over the past decade, we can account for over $19 million in venture funding raised,” Martinez said. “That’s an impressive number coming from our 69 student-founded companies.”

Martinez also announced that Trinity is launching an early-stage investment fund to focus on early-stage startups. The fund will be used for startups beyond Trinity’s entrepreneurship program and rely upon deal flow partnerships with Alamo Angels, Geekdom, and Capital Factory.

“We plan on modeling our new program on other successful collegiate venture competitions, such as the Baylor New Venture Competition and Rice Business Plan Competition,” Martinez said.